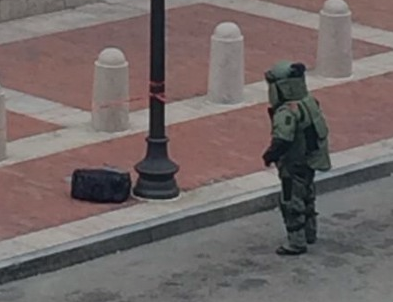 On June 14 in Dallas Texas a man (whose name I know but to whom I refuse to give any recognition) opened fire on Dallas PD headquarters with a rifle and a shotgun. He also planted improvised explosive devices (IED) with the intent to kill and injure police officers. He blamed the police for taking custody of his child.

My intent here is not to Monday morning quarterback this incident and say “woulda, coulda, shoulda.” By the grace of God and with a little luck nobody was hurt, aside from the suspect who was eliminated by a sniper. My intent is for us to learn from this. Every situation can be a lesson as long as we are willing to be humble and view it through the eyes of a student.

One lesson we must learn is we must pay attention to red flags and have a way to anonymously report suspicious behavior without consequence. These red flags can be important signs of someone who is on the pathway to violence. People don’t simply snap any more than water simply boils. There is always a progression. Water has to get warmer before it boils just as people on the path to violence will display certain characteristics before their breaking point.

CNN reported that the suspect had mental issues. They said that he “claimed he could see into the future, talked to chairs, spoke about shooting schools, choked his mother and threatened to crucify her.” In my opinion, the first two claims are not necessarily signs on the road to violence but they are evidence of mental illness. The second two claims are not only cause for concern but evidence of violent behavior and proof of the suspect’s intent and capabilities. One acronym I came up with to help with risk assessment is RISC.

RISC
R is for the Reasonableness or Realistic nature of the threat. A threat of “I’m gonna blow up the world” does not have the validity of somebody saying “I’m going to go to my car, get my tire iron, and beat you with it.” Although both are threats, one only one is plausible.
I is for the Intent. Does this person actually want to cause harm or just intimidate? In their article, “Threat Assessment: An Approach To Prevent Targeted Violence” Robert A. Fein, Bryan Vossekuil, and Gwen A. Holden state, “…recognizing the difference between ‘making’ and ‘posing’ a threat is crucially important.” So summarize, is the dog just barking at you or let you know he is there or is he going to bite you? Is the suspect blowing off steam or are there signs and evidence that show they are on that path.
S is for Specificity of the threat. Is the threat general or very specific? In reference to the above example, somebody saying specifically what they will do is more of a threat that somebody making broad statements.
C is for Capabilities. Based on this person’s past experiences, training, knowledge, and mindset is that person capable of the mentioned threat?

There were a lot of red flags in this man’s past… a checklist in fact.

The police were called to his house multiple times regarding a custody battle over his son between himself and his mother and one instance resulted in the subject choking his own mother.